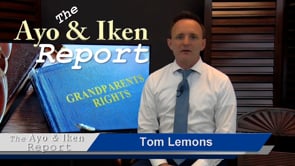 Hi. I’m Tom Lemons and this is The Ayo & Iken Report. Divorce and child custody battles almost always create conflict between the parting parents and their children. Often time, one or both parents use children as pawns to manipulate the outcome of a divorce or simply hurt the very person they once loved. In those cases, rarely do parents consider the damage caused to innocent children who are being pulled in all directions.

But, what about the grandparents? Do they have rights? It’s the children’s grandparents that often come to the rescue and help soften the impact of a hostile divorce, so what happens when the bickering comes to and end and divorces are final? Ayo & Iken attorney, James Wimsatt says, “Not much, since laws changed several years ago.”

Well, there was a law in Florida and then the Florida Legislature passed a law granting parents the right to seek visitation, but the Florida Supreme Court has ruled that, that interferes with the parents’ privacy rights in raising their children, unless the grandparent can show demonstrated or actual harm to the child. If a grandparent can say, “This child is in danger,” they can institute dependency proceedings and go that way, or they can say, “This child is in danger and needs to put in my care.” That’s how a grandparent can have rights, but in general, both the Florida Supreme Court, and actually the United States Supreme Court in a Washington State case has said that parents privacy rights in raising their children trump any rights that the grandparents may have. It’s actually been unconstitutional violation of the parents’ rights to raise their children to grant grandparents the ability to petition for visitation or time sharing with the children.

I met with Angel Morgan here at her home in Brooksville, who’s been alienated from her grandkids for several years. She says greed plays a big role in not being able to see her grandchildren.

If he’s not constantly handing money over to his son and his daughter-in-law, if he’s not promising that they will inherit everything when he dies, then we’re not allowed to see his granddaughter. It is a money issue. It is a money issue. He is so afraid that his dad is going to leave me everything. It was so bad in the beginning when in was dating my boyfriend to even get them to come to holiday dinners, I had to pay them, like secretly behind my fiance’s back, I was giving them money to come to the holiday dinners.

Yeah. I mean, to be clear, the Florida Legislature tried to pass a law that granted grandparents the right to petition for visitation. The Florida Supreme Court and a bunch of other courts, lower courts, found that to be unconstitutional. But, in the absence of demonstrated, some of the cases, they demonstrated harm or substantial harm to the child. So, if you can show that the child is actually being harmed, and some courts might say, if the parents are doing drugs in the house, that’s a substantial harm to the child, other courts might not. They might want to see actual harm to the child. That’s when, unfortunately, you have to meet that barrier, which is a pretty high one.

Her grandmother dies of brain cancer. We made a photo album for her because they will not allow her. They didn’t even tell her that her grandmother died. She went to school and she said, my mom and dad said my grandmother went to heaven, but I don’t where heaven is, so can you tell me where heaven is so I can go see my grandmother again. Last year, she begged me, “Can you sneak me a photo of my grandmother?” She called her, “her Immy.” That was her Immy. I said, “If your parents find they’re going to take it away.” She took it to school. She kept it in her desk all year long. I said, “Summer is coming, what are you going to do with the photo?” “I’m going to sneak it home in my backpack and hide it.” This year when she went back to school, she took it back to school. She keeps it in her desk, just so she can see a photo of her grandmother, so she doesn’t forget her. She doesn’t want to forget her. She loves her.

It is so sad. It’s heartbreaking. He’ll sit and cry. He’ll look at albums of Emily’s photos and he cries. He’s 69 years old. He doesn’t have much time left to spend time with his granddaughter and he knows it. And, they just don’t see the bigger picture. They just don’t see it. It should not be a state thing. It needs to be a national law that covers every state because I can tell you 10 of my friends who go through the same thing. Grandparents should have the right to be a part of their grandchildren’s life. There needs to be legislation. There needs to be changed.

Pretty much, the grandparent is going to be the one coming in and trying to take total responsibility for that child. It’s more of a dependency case type of situation. And, if there’s a severe situation a grandparent can institute a dependency case on their own and try to get custody of the children that way. Unfortunately, there’s not a lot they can do in those situations.

There are plenty who disagree that grandparents should have automatic visitation rights, especially when there are bad grandparents, just as there are bad parents. Should lawmakers readdress the issue or is the system fair as it stands? Reporting from beautiful Tampa Bay, I’m Tom Lemons.