Modification of Parenting Plans in Florida

Children grow up fast. As they do, their needs, desires, goals and interests all change. Their relationship with their parents changes as well. Whereas a child might

be more attached with her mother during infancy and childhood, the child may become more attached and develop a better relationship with her father during adolescence. Children of divorced spouses are no different. But whereas children of a committed couple can simply choose which parent they would like to spend more time with, children of divorced couples must comply with orders the court enters. These orders can direct that they live primarily with one parent and may even dictate how often they see the other parent. These orders are contained in a parenting plan.

Parenting plans may be modified as circumstances change and the child grows. However, it can be a burdensome process to modify a parenting plan, especially if the other parent is objecting to changing the plan.

Happily Ever After . . . Modifying the Parenting Plan When the Parties Agree To Do So 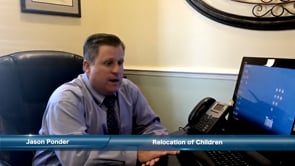 Before discussing how to modify a parenting plan through the court, it should be mentioned that parents can in virtually every circumstance modify a parenting plan by agreement. (One possible exception, for instance, is if one parent has put the child’s life in danger in the past.) Courts are eager to encourage divorced parents to work together and communicate one another about their children’s needs and take measures to meet those needs.

For example, suppose a divorced couple has one child in common. At the time their parenting plan was entered, the child was only two years old and the parenting plan

called for each parent to exercise visitation with the child for 1 week at a time (that is, mother would have the child for one week, and then father would have the child for one week). But now the child is ready to start school and father lives in a different school district than the mother. The parents can agree amongst themselves to alter the parenting plan to allow the child to reside with the mother during the school year with the father having some weekend visitation in exchange for the father getting extended visitation periods on school breaks and during the summer (or any other agreement the parties wish to make).

To protect yourself in the future, it is always recommended that you inform your attorney that you have made a change to the parenting plan by agreement. A written agreement should be drawn up that memorializes the changes you are making. Both parties should then sign the agreement (along with their attorneys, if any) and the original signed agreement should be filed with the court. This prevents the other parent from attempting to claim later that there was no agreement and you are attempting to interfere with his or her parenting time.

In determining whether to modify a parenting plan, the court is to make decisions it

believes are in “the best interest of the child.” It will generally modify parenting plans when there has been a substantial, unanticipated change of circumstances and the modification of the plan is in the best interest of the child. “Substantial” means that it must be of a permanent or near-permanent nature; “unanticipated” means that the situation was not or could not have been anticipated by the parties or the court at the time the original parenting plan was ordered.

So What is “the Best Interest of the Child?”

Parents should note that there are also facts and circumstances that the court will almost never find justify a change in the parenting plan:

So How Do I Start?

The motion does not need to be long but it should indicate that you are seeking a modification of the parenting plan. You should also include brief statements as to why the existing parenting plan is not working and why you believe your proposed plan is in the best interest of the child.

The parenting plan should be as comprehensive as possible. This means the plan should touch on the following areas:

A copy of your motion and your proposed parenting plan needs to be filed with the clerk of the court and a copy served on the other parent. The court will set a date for your hearing.

The Hearing Date – What to Expect

On the date of your hearing, you will need to present evidence and testimony that support the reasons you cited in your motion as justifying the modification of the parenting plan. Your testimony and statements alone will not be enough. You should plan on bringing witnesses or having evidence available to support your reasons for requesting a modification. An attorney can help you identify and subpoena witnesses and request evidence. Some of the witnesses and evidence you may want to consider include:

o   Therapists / psychologists who have examined or treated your child

o   Parents of your child’s friends

The law does not require you to have an attorney in order to proceed at the hearing. However, you should be aware that if you do represent yourself you are held to the same rules and procedures that attorneys must abide by. You must properly present evidence and testimony and make appropriate motions for the court to rule on. Neither the court nor any other attorney present at the hearing can give you legal advice during this hearing.

What to Expect After You’ve Presented Your Evidence

present any evidence or testimony he or she wishes the court to consider. Once this is done, the matter will be decided by the court. In most cases you should get a ruling on your motion that very same day; however, the court may take the matter under advisement.

Modifications of parenting plans are granted by the courts, but you must have compelling evidence to support your contentions and request. An attorney can help evaluate your situation and advise you as to whether your motion is likely to be denied or granted. If the attorney believes you have a good chance at being successful in your motion, your attorney can help you locate evidence and witnesses to support your motion and present this information to the court.