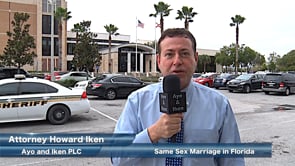 **  The attorneys at Ayo and Iken applaud the LGBT community for prevailing in their quest for equal legal treatment in the State of Florida.  We welcome your questions about family law and your business is welcome in our law firm.  We have attempted to summarize some of the unique challenges in the 2015 year ahead for same sex divorcing couples.

Due to the archaic nature of our legal system same-sex marriage is in its infancy. Judges are left with little-to-no guidance on how to rule on same-sex divorce cases. They must interpret laws that were written with heterosexual couples in mind. The unique challenges that same-sex couples will face when seeking a divorce are yet to be seen.

In Florida, as of January 6th 2015, the ban on same-sex marriage appears to be ending. Though this is a celebratory moment, it means that we must prepare for the very real possibility of same-sex divorce. In fact, a Florida judge recently granted the first same-sex divorce in Florida.

When a couple enters into a marriage, that couple receives certain legal rights. One such right, is the right to dissolve the relationship or divorce. However, same sex couples often face difficulty receiving and enforcing those same rights.

A Florida Circuit Court Judge Dale Cohen granted Florida’s first same-sex divorce recently. This divorce ruling garnered national attention in part, because same-sex marriage is currently illegal in Florida. The woman who sought a divorce entered into a civil union in Vermont. She sought a divorce due to her partner’s infidelity. Judge Cohen ruled that Florida’s ban on same-sex marriage was unconstitutional and granted the divorce. Same-sex divorce can pose unique challenges to same-sex couples in Florida.

Florida as of the year 2014, did not recognize same-sex marriage. Same-sex couples who were legally married in other jurisdictions and later moved to Florida, lost the rights they obtained when legally married elsewhere. However, this is projected to change very soon in Florida. As of January 6th 2015, same-sex couples should be permitted to marry in Florida. This comes as the result of a court case, Brenner v. Scott, which challenged the constitutionality of Florida’s ban on same-sex marriage.

Brenner, involved numerous plaintiff’s who are in same-sex marriages and seek to have their marriages recognized by the state of Florida. Many of the same-sex couples were legally married in states that recognized their union. However, upon returning to Florida, these couples found that their union’s were not recognized by the state of Florida which meant they did not have the protections that heterosexual married couples enjoyed. For instance, if one of the partners died without a will, and the state did not recognize their union, the surviving spouse is not entitled to inherit the decedent’s property. However, in most states, some portion of the decedents estate goes to the spouse.

The judge that presided over the case, Judge Hinkle elected to stay his final ruling until the United States Supreme Court heard marriage equality cases in other states. The judge’s decision to stay means that the proceeding and/or enforcement of a court ruling is temporarily delayed. In Florida, the judge’s decision to stay his ruling meant that same-sex couples could not marry in Florida until the stay ended. The judged ruled that Florida’s ban on same-sex marriage is unconstitutional. Specifically, the judge noted that, Florida’s ban violates the equal protection and due process protections guaranteed by the Fourteenth Amendment to the U.S. Constitution. The judge’s stay ends on January 6th 2015. After January 6th, the judge’s ruling that deems Florida’s same-sex marriage ban unconstitutional is enforceable.

The people of Florida should celebrate this milestone in civil rights. However, with marriage, sometimes comes divorce. According to an article by The Washington Post, same-sex couples seek divorce at comparable rates to heterosexual couples.

To obtain a divorce in Florida, the person seeking divorce must prove that either, the marriage is irretrievably broken or that one of the parties is mentally incapacitated. To receive a dissolution of marriage certificate, a party must present evidence that their marriage meets the requirements for divorce. If the couple has no kids and the responding party does not challenge the divorce, the judge may grant the divorce. When the couple has children, or the responding party denies that the marriage is irretrievably broken then the judge can take other action as outlined in the statute.

When the divorce is challenged, the judge could order any of the following: psychiatric evaluation, give the parties at most three months to attempt to reconcile the relationship, or order action by the parties that seeks to further the best interest of the child.

Prior to January 6th 2015, the bulk of the unique challenges that same-sex couples faced surrounded issues of seeking divorce in a state that did not legally recognize the couples marriage. After January 6th 2015, the unique issues that same-sex couples will face will more than likely surround issues dealing with the custody of children that are adopted or consumed through artificial insemination.

Challenges When Both Parties Have Legal Rights

Divorce is difficult for all parties involved – especially the children. Custody divorce challenges arise in many divorces. Problems arise when both parties involved do not agree on a shared custody arrangement. Seek legal counsel as soon as possible to ensure that an enforceable-shared custody agreement is drafted. If both parties can agree on child support beforehand it will make the divorce run smoother. Depending on the custody arrangement, if both are the legal parents both parties will have a legal obligation to care for the child. This same obligation will not automatically arise, absent some type of an agreement, when only one person is the legal parent.

Challenges If Only One Person Is The Legal Parent

Many challenges arise when only one person has the legal rights. The reality is that, it becomes extremely difficult to seek custody or visitation when you do not have any legal rights to parent the child. If you do not have legal parental rights, it will become even more important to have a shared custody agreement drafted that both parties can agree upon. Think about the child. Often, divorce gets personal, it becomes more about the couple splitting than the children. However, when a child has been raised by two people for many years, that child may see both parents as a huge part of his or life. The law doesn’t always take this into account. Thus, the responsibility is on the parties to come up with an agreement that both parties can agree to. We see the challenges highlighted in cases where the child was adopted, or created through artificial insemination.

Some same-sex couples adopt. Others, bring children into the world through sperm-donation. When adopting, if both parties are not listed as the adopting parents this can make custody battles lengthy and cumbersome. Even if one spouse adopts a child before marrying the other spouse, both spouses should at some point adopt the child and legal parents to the child. This can occur through a second-parent adoption.

One high-profile custody case illustrates how challenging custody cases can be when the origin of insemination is sperm-donation. In an article entitled “Does ‘Sperm Donor’ Mean ‘Dad’? A couple battles for custody when a man donates his sperm to assist a women in getting pregnant. In this case, the sperm donor’s intent was not clearly laid out from the beginning. Though this case did not occur in Florida, the lesson that can be learned is clear: you must have clear intentions when using a sperm donor and all parties involved should know exactly what those intentions are. Having a detailed and well-drafted contract can help to alleviate later confusion. Speak with an attorney whenever contracts are involved. Though case law attempts to provide guidance on this area of the law, it is not always 100% clear. In today’s society, nontraditional couples are increasing, meaning that the fact patterns represented in older cases may not reflect modern challenges.

Alimony in a Same Sex Context

Gay couples are increasingly getting prenuptial agreements. These agreements are helpful in distributing alimony in the event of a divorce. In Florida to determine alimony, courts consider the length of time a couple has been married. A marriage that lasted less than seven years is considered to be a short marriage. A marriage lasting over seventeen years is considered to be a long marriage. In Florida, permanent alimony, meaning permanent financial support, is only available for long marriages.

Alimony is money that one spouse may receive due to their financial dependence on their spouse during the marriage. Florida recognizes various different types of alimony that may be awarded. An attorney can assist couples to draft enforceable prenuptial agreements that address alimony. In United States v. Windsor, it became clear that alimony is taxable income. The person who receives alimony will be taxed. This is the case for federal taxes however, state taxes may differ. You should consult an attorney about the taxation concerns of alimony in light of the Windsor case.

The challenge same-sex couples in Florida seeking alimony may face is proving the duration of the marriage. The only reason a marriage may have been short under the law is because the couple could not legally get married in Florida. Nonetheless, as the law is now, judges look at the length of the marriage. Courts may consider the same-sex marriage ban and look at the length of the relationship but that has not yet been seen in Florida.

It has yet to be seen what challenges same-sex divorce will bring in Florida. Now that the same-sex marriage ban will soon be lifted, Florida will undoubtedly see more same-sex marriages. When there is an increase in marriages, there will undoubtedly be an increase in divorces. It is unclear how judges in Florida will rule on unique issues posed by same-sex divorces. However, due to the limited precedent judges have to rely on, it is clear that having an experienced attorney to assist with your divorce is vital. There will be unique challenges that same-sex couples will face as it relates to child custody. However, having an agreement as to custody will help alleviate many of those problems. In sum, when questions arise about what you need to do to protect your rights before, during, and after a divorce, consult with an experienced divorce attorney. Florida may be lifting the same-sex marriage ban, but it is never too early to consider protecting yourself.