Lawmakers in Tallahassee Take Another Shot at Reforming Alimony

TALLAHASSEE – An unexpected development has brought a glimmer of hope to thousands of obligors who are trapped in what some lawmakers argue is long-overdue change to the rules of alimony in Florida. For decades unfair practices and antiquated statutory laws have devoured the livelihoods of estranged former breadwinners, with no end in sight. Several previous attempts failed to make it past committee, due to opposition leaders and groups who believe long-term alimony is an entitlement for post-divorce survivors. But a lot has changed since the last effort earlier this year and lawmakers are now receiving backing from both sides of the aisle, as a new group of proponents are taking a more diplomatic and rational approach to gain bi-partisan support. 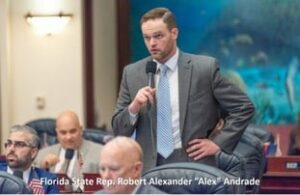 Today, Rep. Alexander “Alex” Andrade (R) from Pensacola, introduced HB 843, which will create a more harmonious dialogue between democrats and republicans. During an interview with Rep, Andrade, he pointed out a few major changes that would be presented in upcoming committees. “I want to do away with permanent alimony,” says Andrade. “The length of alimony should not exceed 50% of the length of a marriage.” Andrade also said, “We should not be paying attorneys to determine assets, it should be more black-and-white and easily defined without lengthy litigation.” He went on to point out that adultery should no longer be a factor in deciding who is at fault in a state traditionally known as a “no fault” state.

An issue that many new spouses may not know before tying the knot with an alimony obligor, is that he or she may be responsible for paying alimony for the previous spouse. This bill would bring an end to that long-standing rule. “We need to catch up with the times and I believe we have a very good chance of passing this through the House and onto the Senate.”

I spoke to Marc Johnson, Chairman of the Florida Family Fairness Organization, who is spearheading efforts with lawmakers and he says, “ I’m overwhelmed with optimism over the what appears to be a Fastrack to a positive outcome for so many who have felt cheated by the system for years.” Johnson explains, “Diplomacy is key to achieving political goals, especially when it should be a non-political issue over something that contains a gray panel of statutory guidelines.”

The Bill addresses several of the following areas;

There is one provision outside of alimony reform that may receive some pushback from the opposition, but if accepted, it would give judges the tools they need to help enforce shared parenting. As one of the most acrimonious elements of a divorce involving children. Rep. Andrade proposes to make Florida a 50/50 legal presumption of time sharing. “It’s in the best interest of the children,” says Andrade, “This would essentially open custody cases with the presumption that both parents are on an equal playing field, with no presumption that mothers should automatically have an advantage of being the primary caregiver.”

The bill will be presented sometime in early January, according to our sources, where members of the Civil Justice Committee will debate elements of the Bill.