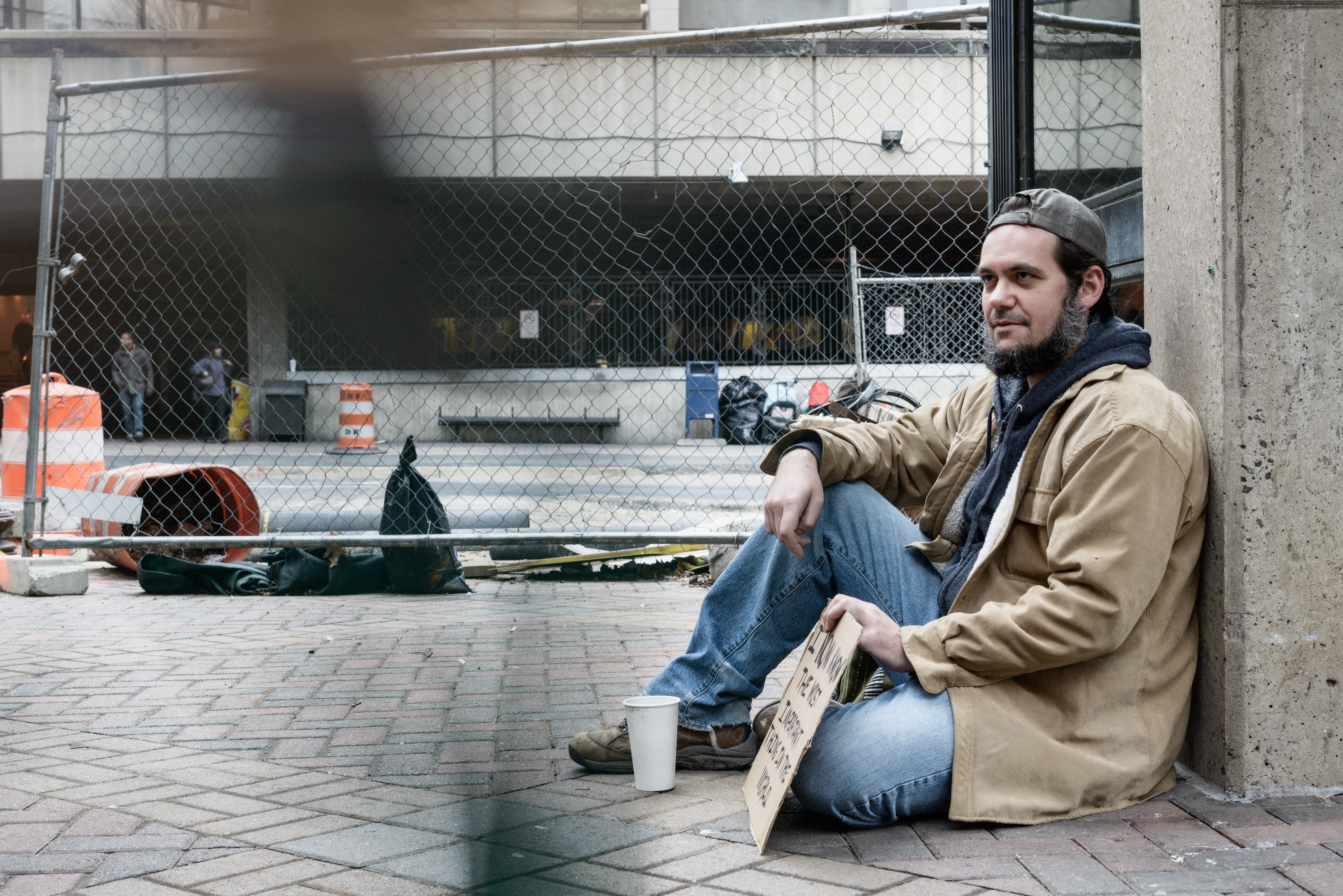 It’s a sunny day in Central Florida (about 100 degrees outside) and I pull up to a major intersection. In the median walking toward me a full suited firefighter holding a boot and asking passerby’s to donate to his cause. I roll my window down and hand the handsome firefighter a twenty dollar bill and make quick small talk about the heat and how appreciative I am for his civic duty. Another day, this time it’s raining cats and dogs out, I pull up to a different major intersection and see a parade of pink. There are men and mostly women walking up and down the median seeking donations for the War on Breast Cancer. They have pretty pink umbrellas and are smiling at all of us drivers. I immediately search in my purse for some money to donate. After all, its for a worthy cause and I have friends surviving from cancer. Then, on the few days a year that it is actually “Florida Freezing” I am on my way from court to the office and stop at a major intersection. A man in tattered clothes holding a faded cardboard sign is sitting in the median. The sign might have said, “Need money for food. God bless.” I’m a church-goer and I do mission work. If we were in Sao Paulo, Brasil on one of my many mission trips then I would likely be pulling blankets and sandwiches from my trunk. I have gone on more mission trips and outreach projects in my life than I can count. But there is something about working in Central Florida and seeing possible homeless persons begging for money that just does not move my purse strings on that occasion. So what is the difference between the three scenes and am I the only one to notice?

In Palm Beach County panhandling is actually legal. Law enforcement officers have the authority to stop panhandlers from irritating or bothering people and can make the person move from some areas for possible loitering. The county attempted to propose an ordinance against panhandling in 1992 but the ACLU threatened a lawsuit. In 1998, the county actually posted signs in an effort to discourage drivers from contributing to this “profession.” Even though the county considered a ban against panhandlers, they did want to continue to allow charitable contributions (think firefighters and breast cancer).

In 2010 St. Petersburg passed an ordinance that made all panhandling a misdemeanor. The law applied to panhandling and not to vendors of goods or charitable contributions. Typically, offenders are given a written warning for first offenses and possible jail time for additional offenses. The result seems to be that most of the homeless are crossing the bridge to Tampa which does not have a panhandling ordinance in place as of 2010. Prior to 2010 no panhandling zones were simply areas and attractions in downtown that contributed to bringing in money for the city (retail, pedestrian, and tourist oriented business). Aggressive panhandling is a solicitation made in person for an immediate donation of money and usually involves some form of vocal appeal like badgering, coercing, threats, demands or harassment. It can also be done with nonvocal appeals such as using children, animals, props like toys or musical instruments. The reason that panhandling (especially the aggressive type) is a misdemeanor in some counties is because it is considered a form of emotional and financial abuse.

Recently, Orlando enacted an ordinance requiring panhandlers to obtain a license from the police department in order to confirm their situation and allow them to legally panhandle in the Orlando area. The ordinance restricts the available locations for panhandling (not allowed to solicit in downtown) and does not allow same within fifty feet of banks and ATMs. A panhandler’s license is a method for the city/town to keep tabs on the act of panhandling. The department can check if the applicant has any outstanding warrants or a history of violence. This is a good way to track the number of potential panhandlers in the community and provide information to the applicant about what resources are available for them such as soup kitchens, job search companies and halfway houses. In order to obtain the license you must have a valid form of identification (driver’s license, passport or state identification). In 2000 Orlando allowed downtown begging only in “panhandling zones” which are small blue boxes painted on the sidewalk. In 2007 the city changed the rules to prohibit panhandling after dark. Orlando also has downtown donation meters which are used to collect contributions (and not to regulate parking). The donations collected from these donation meters are provided to the Central Florida Commission for Homelessness (nonprofit organization partly funded by the city).

There is an ongoing debate between constitutional lawyers (including American Civil Liberties Union and others) and city or counties nationwide concerning the definition and criminalizing of panhandling. Constitutional lawyers argue that the First Amendment of the United States Constitution protects activities such as begging. There are organizations and groups all over the U.S. that regularly engage in highly public fundraising for various causes and charities. Counties and cities continue to attempt to restrict or limit these “interruptions” by persons begging in public places by defining aggressive panhandling which appears to be one of the only terms to pass constitutional inspection.

While researching this topic I came across an interesting article written by Brian Botano on Friday, May 17, 2013 titled “World’s Richest Bum Offers Panhandling Classes in Florida.” Duane Smith is labeled the ‘Donald Trump of Hobos’ in his community of panhandlers and he has started offering classes to teach fellow beggars the art of increasing their earning potential. It is estimated that Ms. Smith has made millions from begging on the street corners of Orlando. He instructs his class on creative ways to make their signs stand out and the proper way to dress (as poorly as possible and pour on the filth/urine/stink). There are an estimated over one million panhandlers in Florida (might be the year round gorgeous weather). Mr. Smith concludes his class by bringing in prior students who have followed his instructions and are not millionaires themselves. As Mr. Smith states, “There are millions of suckers out there looking to give away their money and most of my students just need help figuring out how to get it.” https://www.outhousedaily.com/2013/05/worlds-richest-bum-offering-panhandling.html