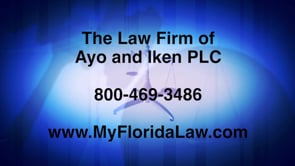 In the Coral Gables area of Miami, Ayo and Iken PLC has an experienced team of alimony attorneys that can help you navigate the complex waters of Florida Alimony Law. Our team understands that clients do not retain us to come in second place. By retaining us you gain access to one of the largest family law firms in the state of Florida. We will put our many combined years of experience to work for you immediately. Call today to arrange a free consultation with one of our Miami alimony attorneys

In our Coral Gables office, we use a team approach that:

In an earlier article, we explained that, thanks to Internal Revenue Code §215, you may deduct any alimony payments you make from your taxable income. However, people tend to make all kinds of errors that cause them to lose that deduction and then they often have to pay penalties on top of that. If you’d like to keep your alimony payments deductible, you primarily need to understand what actually counts as alimony under the Internal Revenue Code. You can read more about this in the previous article, titled, “Alimony and Taxes.”

It counts as deductible alimony if it is:

Now, let’s see a couple more examples of how people get it wrong.

George and Diane Resnik have three children. Their oldest is Luke, who was born with a neurological disorder that limits his language comprehension and confuses his speech. The parties divorced on March 6, 2007. Diane got primary physical custody of the children and ownership of the house. She’s been taking care of Luke. By the terms of their divorce, as a form of alimony (called “maintenance” in the decree), George has to pay 75% of the mortgage until the mortgage is paid off or until Luke no longer lives there on a permanent basis. The mortgage wasn’t paid off yet during 2010 and Luke lived in the marital house throughout 2010. So, in 2010, George paid $14,166 to Wells Fargo, the mortgagor.

Nonetheless, the U.S. Tax Court did not accept his payments as deductible alimony. The Court based its decision on IRC §71(c)(2). Under this section, if, by the terms of the judgment of divorce, the alimony payment amount “will be reduced” upon the occurrence of a contingency related to the child, then that amount, which would have been taken away (or “reduced”) is now converted into child support.

In other words, you can’t have alimony that’s contingent on the child in any way. The IRS simply sees that as child support. It doesn’t matter whether the event relating to the child is likely to occur or not. See IRC §1.71-1T(c); Q&A-17, Temporary Income Tax Regs., 49 Fed. Reg. 34456 (Aug. 31, 1984). Some common contingency events which IRS doesn’t allow include the child reaching a certain age, the child reaching a certain income level, the child dying, marrying, leaving school, leaving the marital home, or gaining employment for the first time.

In this case, George’s alimony payments “will be reduced” to zero if Luke ever leaves the marital home on a permanent basis, therefore the payments are contingent on an event related to the child. Therefore, the IRS considers these payments child support payments, which are not deductible from the payer’s taxable income.

When Marcus Hampers and Kristin Hampers nee Carney got divorced in 2007, they included a provision in their divorce decree which stated that Marcus had to pay all of Kristin’s legal fees, including any future legal fees that might arise related to their divorce decree or their child. They went on to have a number of other legal proceedings after this initial decree in 2007 and Kristin incurred fees in the amounts of $44,012 in 2009, $68,113 in 2010, and $153,394 in 2011.

Marcus paid all those fees and claimed them as deductible alimony from his taxable incomes. The IRS disallowed a lot of it. And the U.S. Tax Court agreed. The reason had to do with the fourth part of the definition of deductible alimony. In order for alimony to be tax deductible, among other things, the alimony payments must be set to stop upon the death of the recipient. The U.S. Tax Court believed it was possible that Kristin could incur legal fees even after she died, which meant that the payments made in accordance with this agreement would not necessarily stop at Kristin’s death.

Marcus made the common sense argument that after a person dies, their divorce proceedings are automatically ceased. Even enforcement of orders end. He even cited an old New Hampshire Supreme Court case to support his argument. Leclerc v. Leclerc, 155 A.249 (N.H. 1931) (The Hampers are from New Hampshire but their case is relevant to Floridians because the rules are the same in Florida.) The principle behind the rule, which exists in many states, is that because the main point of a divorce proceeding is to dissolve a marriage, there is no reason to issue an order dissolving the marriage when the marriage has already been ended by the death of one of the parties.

However, according to federal regulations, if Marcus got even one bill after Kristin’s death, that would disqualify any previous payments from being considered deductible alimony. IRC §1.71-1T(b), Q&A-10, Temporary Income Tax Regs., 49 Fed. Reg. 34456 (Aug. 31, 1984). Furthermore, the U.S. Tax Court found a number of New Hampshire cases where the courts allowed divorce proceedings to continue after the death of one of the parties for various reasons.

One court allowed a spouse to get alimony payments from her husband’s estate. Another court allowed a person to vacate a divorce decree because his deceased former spouse had obtained it fraudulently.

Finally, the U.S. Tax Court pointed out that if Marcus Hampers ever wanted to argue that the fees were unreasonable, after Ms. Carney had died, that option was still available to him and would, in effect, continue the proceeding well past her death while the divorce court held a hearing on the matter.

Ayo and Iken can help you with all your needs including divorce, alimony, child support, prenup agreements, and enforcement of existing judgements. Call us for a free consultation.

Consultations are always free in our Coral Gables office